Papillomas What they are and how they are treated 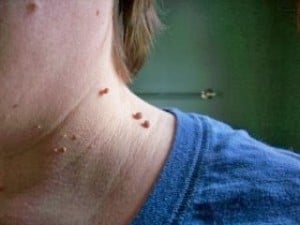 Papillomas are benign skin growths. Colloquially, they are also called "moles", but they have nothing to do with the "olives" of the skin (skin moles). They are small, round, with sessile or stalked appendages of the epidermis. Their surface is smooth or warty (like cauliflower). Papillomas are usually skin-colored but can be tan or even dark brown.

Most people in both sexes have papillomas after the age of 25-30 with about 60% of people developing them by the age of 70. Because everyone's immune system is different, some people get infected more easily than others. The incubation time between skin contact and the appearance of the papilloma can be up to three months. Papillomas are caused by HPV (Human Papilloma Virus), the viruses that cause warts and warts. However, papillomas are not equally contagious. That is, they are not easily transmitted from person to person. Papillomas can multiply and spread in the same person after rubbing or trauma to the area. The main responsible HPV viruses that cause papillomas are HPV 6 and HPV 11. These are essentially low-risk viruses.

Papillomas are usually asymptomatic, i.e. they do not cause discomfort. They usually appear in warm and moist areas of the body, where the skin creates folds (on the face and especially on the eyelids, neck, armpits, inguinal folds, under the breast, etc.) and favors the growth of HPV viruses due to the increased skin friction with skin. But often as they grow or multiply they can cause various discomforts. Discomfort also occurs in case of twisting of their stem, in which case inflammation is created which causes sensitivity. Some patients with papillomas report itching in the area and a burning sensation, especially in the summer months in conditions of intense sweating. Many times the papillae are injured and bleed causing worry to the patients. Scratching or rubbing (eg constant irritation from underwear-bra) can lead to inflammation of the papillae with swelling and pain.

Sometimes the papillae become very large and form the acrochordons or hanging terminus.

Papillomas can occur in practically everyone. But there are some predisposing factors and their appearance is favored in certain groups of people.

It has been observed that papillomas appear more commonly in people who are overweight or obese. Possibly due to increased sweating and creation of folds (which lead to increased skin-to-skin friction) in the skin that favor the growth of human papillomaviruses. In these cases, losing weight also reduces the appearance of new papillomas.

Papillomas often occur in diabetics. In these cases, they should be treated immediately, as the risk of papilloma inflammation is greater in diabetics.

Trauma favors the spread of papillomas. Even mild trauma such as scrubbing with a sponge while bathing, as well as with towels, multiplies papillomas. The same applies to chains around the neck which, by friction, aggravate the problem of cervical papillomas. Even more, shaving the area affected by papillomas favors the transmission of the virus, as the razor carries the virus to new areas where it inoculates (enters the skin).

Papillomas and association with acid warts

Papillomas are caused by the same group of viruses that cause warts and warts. Therefore papilloma and wart or wart often coexist in many patients.

There is no hereditary predisposition to the appearance of papillomas, as it is a condition caused by a skin virus. However, it seems that when a person has papillomas, other people in their family are likely to have them too.

The following measures prevent the appearance of papillomas

Papillomas are benign skin tumors, they are always confined to the skin and there is no risk of turning into cancer if injured or removed. The removal of papillomas is done mainly for aesthetic reasons.

Removal of papillomas with CO2 laser

Laser papilloma removal is the most modern and effective papilloma treatment that leads to the complete elimination of existing lesions. The treatment is extremely precise and targeted. The laser beam is heated with millimeter precision to the lesion and destroys it without leaving scars on the skin. Also the surrounding healthy skin remains intact. The use of the CO2 laser is painless (preceded by local anesthesia with injectable xylocaine), bloodless and immediately after the removal of papillomas by laser, one immediately returns to one's activities.