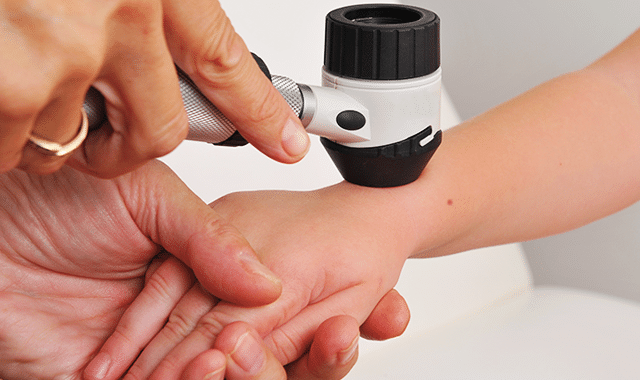 Moles are accumulations of melanocytes (i.e. cells that contain melanin) in the skin. They appear either in the form birthmarks, which are visible at birth or during the first year of life, either acquired moles which appear later, during childhood or young adulthood.

THE heredity determines their number and morphology, for example flat or domed moles are encountered, in the color of the skin or in shades of brown. However, epigenetics also affect their appearance external factors, such as sun exposure.

Congenital nevi are divided into small, i.e. those with a diameter of less than 1.5 cm, medium (from 1.5 to 10 cm), large (from 10 cm to 20 cm) and giant (with a diameter of more than 20 cm). Their size proportionally increases as the child grows and the surface of the skin they cover expands. During the child's growth stages, the moles may become darker or, while they start out flat and do not protrude from the surface of the rest of the skin, they later acquire a warty surface, like a "cauliflower".

THE possibility of conversion of birthmarks in malignant melanoma is bigger concerning big and gigantic birthmarks, while it is much smaller for others. However, it is worth noting that melanoma is very rare in childhood. If it does occur, it has a poor prognosis.

THE surgical removal of large and giant moles as soon as possible, greatly reduces the risk occurrence of melanoma, but does not make it zero as there is always the possibility of melanoma occurring in another location. Also, the aesthetic result is always of interest when we think about removing a birthmark.

Acquired moles are usually less than 1cm in diameter and remain unchanged in color and shape until puberty. Many of them follow a specific path of development. They start as flat light brown/black spots which slowly increase in diameter. When this horizontal phase of growth is complete and they stabilize in size, the moles expand in depth (root) so they become domed. This is their vertical growth phase. It is essentially a benign development of their clinical picture, which does not concern us medically.

THE main examination method and mole control to the children is the clinical examination with its help dermatoscopy. In cases where it is deemed necessary, the  mapping. Dermatoscopy is a useful diagnostic method that, using specialized equipment, magnifies the microscopic details of the mole's melanin network and allows the dermatologist to distinguish atypical and potentially dangerous from benign moles. In the event that there is a single or a small number of potentially dangerous (dysplastic) moles, we can proceed with surgical removal and subsequent histological examination-biopsy or schedule regular rechecks in order to detect any changes in time. But when the dysplastic nevi are numerous, surgically removing them all is an extremely difficult task, so we recommend mapping.

The mapping of moles constitutes specialized examination method during which, with the help of special equipment and standard computer software, the exact location on the body and the dermatoscopic image of each mole are recorded. With periodic rechecks, any changes in moles that we have identified as potentially dangerous are noted.

A "suspicious" nevus is considered:

The size, absence or presence of hairs are less indicative of malignancy or atypia. In each case appearanceof such a mole or change of the appearance of a pre-existing and appearance of these features will you should consult a specialist.

Parents, as a main concern should have control of the child's exposure to the sun's ultraviolet radiation. It is an important risk factor for melanoma and acts cumulatively since childhood. Effective protection of children from the sun should start from their first day of life! It is worth noting that the sunburns in childhood is the more important exogenous predisposed factor for melanoma in adult life.

Therefore, protection from the sun, attention to the appearance or change of appearance in the "elices" that appear on the skin of our children and we minimize the possibility of the appearance of melanoma in their adult life!