Menu ≡ ╳
What is onychomycosis?;

Fungal nail infection is described by the general term onychomycosis. As for the responsible fungus, dermatophytes are more often identified (Τριχόφυτο Rubrum),and Candida species. The condition mainly affects adults, however, The number of onychomycosis cases in childhood seems to increase every year (especially in children with immunosuppression, diabetes mellitus or those who tend to put their fingers in their mouths). Toenails are most commonly affected, although in children younger than 7 years old fingernails are the ones with the highest participation rate. Onychomycosis must be treated immediately because otherwise it will spread affecting all nails, but mainly because the affected nail is a gateway for germs to enter the body which can cause serious problems like erysipelas.

A laboratory test is needed before starting treatment;

Fungal testing should in any case, to precede treatment to avoid unnecessary oral administration of antifungal drugs. This is because there are dermatological conditions such as psoriasis, gyroid alopecia, eczema and congenital onychodystrophy with a clinical picture resembling onychomycosis so differential diagnosis should be made.

Topically applied medicated nail polishes (cyclopyroxolamine, amorolfine) most of the time they are not enough because the fungus is also found deep in the uterus and the nail bed, ie under the nail. In order for the medicine to get there (itraconazole, terbinafine, fluconazole) should be administered orally (pill or syrup) and in fact for a long time from 4-6 months (due to the slow growth rate of the nails). The problem is that patients with liver or kidney disease may be significantly burdened by such long-term treatment.. Also the treatment with oral drugs has not been approved for the treatment of onychomycosis in children.

Today we have the ability to use a specialized laser for the treatment of onychomycosis and especially those due to T. Red. This is the Q-Switched NdYAG 1064/532 nm which has very good penetration through the nail, so it cures the fungus under the nail without causing damage to the nail surface or the perineum (the skin around the nail). It is a drug-free treatment (non-toxic) which can be applied to all skin-color types. The treatment is painless and does not require local anesthesia. It just lasts 15-20 minutes and the patient resumes immediately after his activities. Usually required 2-3 sessions which take place per month. After the treatment we do not wait for the nail to clean immediately (although the fungus has been successfully treated). The treatment is considered successful when we see the new nail that is developing to be healthy. 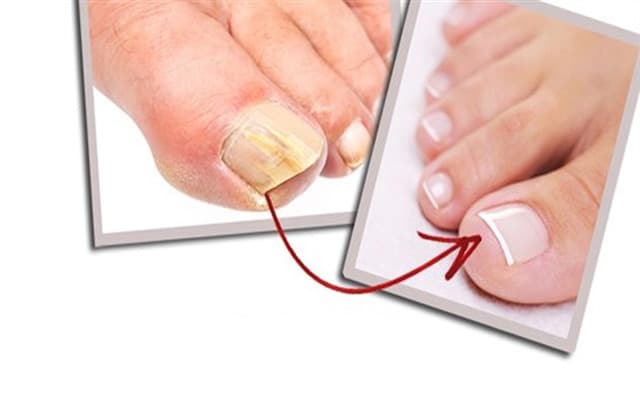 "Today we have the opportunity for a pioneering treatment. This pioneering Qclear laser treatment from the American company lightage is a treatment that is FDA certified for the safety and effectiveness of the treatment.. It is a solution that is easy, without medication and without any pain for the patient. With the laser we can pass under the nail where the fungus lives in the nail matrix, in the area where the new nail is produced and eliminate the fungal colonies. Are required 2 with 3 sessions which take place over a period of one month and are also very effective. Of course the result will be seen a little later, because it takes time 6 months to completely renew the fingernail and 12 for the toenail. "But from the very first session we see a nail that grows strong and healthy."